Next up in the League of Legends character design review is Amumu. 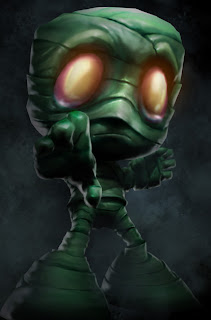 His concept is that he is a sad and lonely mummy. It's a little bit weird, but they really sell it with the spell names and character vocalization. He is built as a tanking character, with high health. 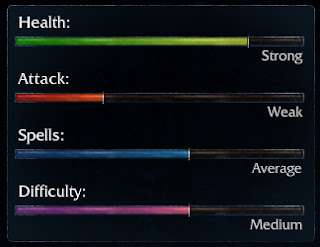 Don't let this fool you, his spells are better than average, they simply aren't high-damage spells. So already you should note that this chart of 4 stats isn't really an "overall power level" chart. Also, I haven't found Amumu to be any harder to play than Ashe, in fact, I would say that all tanks are easier to play than fragile DPS characters because it's much easier to stay alive as a tank. Not only do you have more health and armor, but the other team doesn't prioritize killing you (they go for the damage dealers first). On to his spells.

Bandage Toss: this is a skill shot (you fire it in a direction, and it can be avoided) that sends out one of your mummy bandages like a tentacle. So already it has coolness points for fitting the mummy theme and totally being a tentacle. If it hits it deals damage, stuns the target, and then drags you to the target. This is a very strong ability, and I can understand the overall medium difficulty rating for Amumu based on this being a skill shot, since using it well can make or break your game as the sad mummy. As with all skill shots, you feel extra good when you hit with it. Pulling yourself into a fight is quite interesting, tactically. It's great if you can catch a fleeing enemy, and they get to feel smart if they can anticipate it and dodge it with a slight change in their path. It can be dangerous to Bandage Toss into a group of enemies, but some of Amumu's other abilities work best when you're in the center of the fight. A.

Despair: The poor sad mummy wants to make friends, and so this toggle ability deals damage to all enemies around Amumu every second. The comic flavor here is nice, and this ability fits well into Amumu's overall setup. He can Bandage Toss into a fight and then deal damage to everyone. It's also good while chasing an enemy to deal damage to them if you're both running along at the same pace. Area effect damage is a pretty standard design, but it's well used on this character. Also note that this damage is a percentage of each enemy's maximum health, making it more effective against other tank types. In general percent-of-max-health damage is a great way to give players options against very high-health enemies they might otherwise feel are hard to take down. B+

Tantrum: This ability has a passive feature. The more you upgrade it, the less damage Amumu takes from attacks. Damage reduction on a tank type is clearly fitting. The activation of this ability deals damage to enemies close by all around Amumu. This is fine, but not really much different from Despair. This ability deals more damage in a single shot, while Despair deals lower damage every second... but the result is often the same. There is another interesting layer to this ability, the cooldown is reduced each time Amumu takes a hit from an enemy. That's cool design for a tank - the more you hit him the more often he can use this ability. Sadly Amumu doesn't have any way to make you attack him, so not really any combos with this part of the ability. Also, the three parts of this ability don't quite all go together, and it feels like there's a little too much going on here. I'd rather see something more interesting here, or at least taking off the damage reduction part to make it simpler. B-

Curse of the Sad Mummy: All enemy champions in a good-size radius around you can't move and can't take action for 2 or 3 seconds. Wow, that is powerful. Certainly this ability is among the most powerful in the game. You can halt fleeing enemies in their tracks or interrupt a coordinated assault on a teammate. This ability works very well with any other area of effect spell in the game, trapping foes so they're all hit by the other ability. A.

Taken together, three of these abilities are an excellent combination. Bandage Toss brings you to the center of the action, so you can lock down the enemy team with Curse, all the while dealing damage to all your enemies with Despair. Every pairwise combination is strong and all three together is exactly what you want in every team fight. If there's a flaw in this it's that you pretty much have the same plan each time. Making Bandage Toss a skill shot helps with this - requiring more skill and reactivity from you so that your 1-2-3 isn't always a done deal. Also the overall fact that Amumu is set up like a tank means you're relying on your allies to take advantage of the lock down your providing. Amumu is certianly the most fun to play when your teammates have your back and you can coordinate enough during a team battle that you feel awesome about how you used your spells.

Tantrum, sadly, is left out of all of this. It's aoe is much smaller than Curse, so using them in conjunction doesn't often work. It's pretty good for farming (gaining gold for killing the peons), but Despair has it trumped in that department. I still like the "cooldown reduced when hit" part of Tantrum's design, but the disincentive it gives the opponent to not kill you isn't nearly enough to dissuade them compared to the damage Despair is doing. Besides, they're leaving you for last anyway, and the ability doesn't do anything to save you when it's 4 or 5 against 1. Overall a B+ character design.
Posted by Gregory Marques at 12:12 PM