In this first of a possible series of posts in which I talk about the design of a champion from the most excellent online game "League of Legends" I will examine Ashe, the Frost Archer. For those that don't know, League of Legends is a 5v5 PvP online game in which you control a character with 4 spells. As you play you improve the power level of those abilities and buy items to further strengthen your character. All the while you are trying to kill the enemy champions and wreck their base. It's very awesome, and it's also my go-to game for examples of doing everything right in a modern online game. 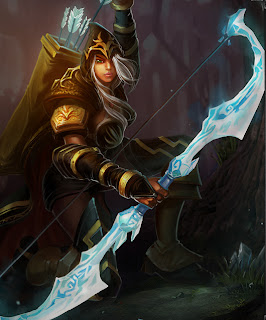 Ashe is one of the champions you can play. She has a ranged basic attack. Her primary role is damage dealer, and has rather low health and does not move very fast. 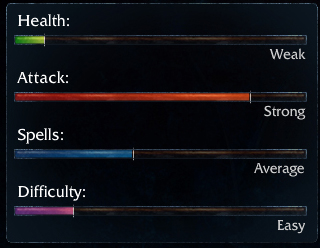 The shape of these stats is interesting and a good design for a game with lots of characters to choose from. Ashe's high attack gives her a clear role, and she will attract players looking to deal a lot of damage. Video games have given us plenty of characters like this over the years, so many that this configuration has a nickname: the glass cannon. On to her spells.

Frost Shot - this is a toggle ability, and while it is toggled on it makes Ashe's attacks slow the movement of her target. It's great for chasing down enemies and sometimes reducing the rate at which a melee attacker can get to Ashe to kill her. A good ability for a low health character to have. B+

Volley - this fires a cone of arrows that deal damage and also have slowing properties. This ability is very good for killing the peon helpers that each team has in the game. Doing that helps you push into the enemy base and also earn extra money. Ashe benefits a lot from equipment that increases her damage and attack rate, so more money is good for her. A solid ability for her to have, it is also fun to use. B+

Hawkshot - firing the hawkshot reveals an area from fog of war. This can be useful, but it's a somewhat advanced ability for a character intended to have "easy" difficulty of play. Knowing what the enemy is doing is very important in LoL, so this part of the ability is certainly good. Hawkshot also has another function. When you upgrade this ability you get a tiny bit more money from those peons I mentioned. Gaining money is good for Ashe, but it's pretty good for everyone, and the way this works is quite boring as a spell. In Ashe's original design, the map-revealing part of this ability didn't exist. All it did was earn her more money. It was weak and boring. Not a good ability at all. F without the vision upgrade, and a D as it is now.

Enchanted Crystal Arrow - the fourth spell of a champion is their "ultimate," the most powerful ability they have. This arrow flies across the entire map until it hits an enemy champion (or flies uselessly off the edge). When it hits an enemy champion it deals a bunch of damage and stuns them for a while. The further it traveled the longer they are stunned. The "fire in a direction" makes this what they call a skill shot - it takes skill to aim it properly, as opposed to abilities that always hit the target you click on. This can take more skill than most, because you are often firing it so far away that the target might move and be missed. You have to anticipate them a little or know when they are likely to stay put long enough to get hit. This arrow is one of the best designed and most fun abilities in the game. Because it can fire across the whole map (5-6 screens away) and can be a devastating stun and damage dealing blow, it can create epic moments of success and near-success that you'll remember for days. A+

I've fired Ashe's arrow into a fight halfway across the map, stunned an enemy that was killing one of my allies, and reversed the outcome of the fight, giving my ally the kill instead. When that happens you feel proud and your allies commend your skill.

Now let's take her abilities together with her overall setup. As I mentioned, the slowing of frost arrow is good combination with her high damage output. The volley can slow a group of enemies in big fights, so similarly good, and helps shape her persona as a frost archer. The vision from Hawkshot can have synergy with the giant arrow, finding an enemy for you to shoot... but the Hawkshot is visible to the enemy, so they'll move before the Enchanted Crystal Arrow reaches them. Also the way you aim the Hawkshot is annoying. You have to click it's final destination, instead of firing in a general direction. This is because it can reveal hidden stuff at the very end of its path. Its range is large, but not the whole map, so if you click too far away Ashe will move before firing it, which can take time or put you in a bad position. It's a little hard to coordinate since you're clicking a location far enough away that you can't see yourself at the same time. Again, for easy to play, this ability just doesn't fit. It also doesn't fit in with her overall theme, making it feel tacked-on. On another character, or with a better implementation, this would be a C or even B, but because it's hard to use (not for pros, maybe, but for new players) and because it's not a great fit for her, I dropped the score.

I'd like to see her Hawkshot replaced entirely, but if not, it could at least be made to fire in a direction, and reveal hidden all along its path instead of just at the end.

Overall, Ashe is still one of the most fun to play, and she becomes very powerful later in the game. I give her an A-. It would be a B+ based on the strict sum of her abilities but the Enchanted Crystal Arrow gets bonus points for being so epic.
Posted by Gregory Marques at 2:46 AM

Email ThisBlogThis!Share to TwitterShare to Facebook
Labels: League of Legends