In a free to play game with microtransactions and virtual goods, why shouldn't you sell everything? If players are willing to buy it, shouldn't you put a price on it and sell it to them? I have seen this attitude in a lot of people in the social games industry. Yet I strongly believe the answer is, no, you should not. I have had to fight to convince others that there should be desirable things in every game that cannot be bought. I will argue that having such things will actually increase your overall revenue, even though you're not selling them.

How does that help? If players can buy everything the want, some of them will do exactly that... and then they will be done. They have it all, and they will shortly find that your game holds nothing more for them and they will quit. Sure, you got some money out of them - but these were your big spenders, your whales! You want them playing as long as possible so they'll keep giving you large sums of money. If they can buy everything right away, you'll lose them. You need some things they can't buy so they'll have a reason to keep playing.

Providing earned-only things also helps the non-paying player. This player needs to feel they can compete with the rich kid next door who buys everything. If there are cool things that must be earned, the non-paying player can feel good about earning them (sometimes ahead of some number of paying players). You are rewarding their loyalty and commitment to the game with a cool thing. This keeps them playing longer, and the longer they play the more time you have to convert them to a paying player. Also, if the things they can only earn are really cool, they will have increased feeling that this game is "worth it" and might change their mind about putting in money for that reason (instead of the reason of "I want X"). Do I also need to explain why you need non-paying players in your game, even if they never pay? I shouldn't need to, but here are two reasons: They tell paying players to come play, and they provide content (in any interactive game) for the paying players.

Needing earned-only things leads to the reasons why I believe two separate currencies is ideal in most free-to-play games. One currency for paid items, and the other for earned items. It is important that there is not any direct way of converting one to the other. Too many free-to-play games allow players to purchase the earned currency either directly or using the paid currency. That removes the main purpose of having separate currencies in the first place.

Dual currencies also leads to the third (and equally important) type of item for sale: the item sold for both currencies. Here's one of my favorite examples:

In League of Legends you can buy extra characters to play. The above image shows part of the store. We can see five characters for sale, each of which has two prices. The first price is in paid currency (the fist), and the second is in earned currency (swords). Obviously, your math should always work out so that the earned currency numbers are bigger, making purchasing feel efficient (compared to earning). Also note that some characters have the same paid price, but different earned prices, or vice versa (I think Garen was on sale at this time).

What does this do? Why is it so important to have two prices on these characters? It leads your players into the critical decision point of whether to spend money or not in a way that is most excellent for you. The player wants to own many, if not all of these characters (because your game design is good - a topic for another day). This player didn't plan on spending money, so they are trying to earn them all. They come to buy a character and they start calculating: "I earn 500 a day, so it takes me a week to unlock Shen, or two weeks for Malzahar. It's going to take me six months to get everyone I want... I can get there, so I don't have to pay, but if I just buy Malzahar now I'll save myself two weeks and be able to get Kennen that much faster."   In addition, there are important items in this game that must only be earned. This also enters the player's thinking: "If I save 6300 earned currency now, I'll be able to get the Runes (those earned-only items) I need that much faster. I can't buy those, so perhaps I should buy the thing I can buy."

With this system of dual currencies, items that are earned-only and items that can be obtained in both ways (and proper pricing) you can lead players into this pattern of thinking, which increases the chance they will make their first purchase. They feel they could earn it all, but they know they don't have that much time, and they realize that time is money, and decide that your game is worth the monetary investment.

If the non-paying player in my story above felt the game was "only for rich kids" because everything was sold up front, for one currency, they would not have played it long enough to reach the purchasing decision point. If there were not ways to earn the valuable goods, and if there were not some earned-only items the player might not go through as many "pros" to making the purchase in their mind when they reach the decision point. Even for players willing to pay from the first day, these calculations are interesting and knowing they will earn some items and not have to pay for everything makes them happy, and more interested in your game.
Posted by Gregory Marques at 6:52 PM 1 comments

When I was very young, I received many gifts on certain holidays. Being a child, I didn't have much control over these gifts, and because my family wasn't wealthy, I didn't ask for much. I got everything from socks to bicycles, and I loved the surprise of opening something and not knowing if I was going to get something really awesome. (Also, for a kid, "really awesome" has a much wider range than it does for adults.)

It's not like that anymore. I ask for specific things, and I get them. If I don't make a list, telling my family what to get me, they become cross with me! When I was a kid, it was easy for them to guess what I wanted. Being a kid, I obviously wanted things that were fun to play with. (Plus, I grew out of my socks on a regular basis.)

As an adult who earns a hearty income, I can now buy most anything I want, I don't have to ask for it and hope it will come to me as a gift. It's nice to be able to do that, even if it means discipline is required, and that I know there are some things out of my reach. I miss the old days, when gifts made me happy, when they were not just a shopping list I had to write - of things I would just be buying for myself if a gift-getting occasion were not approaching.

Perhaps that's why I hate this so much: 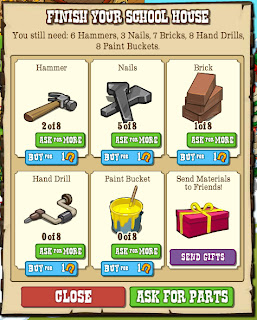 Don't pretend you haven't seen this, or something like it. In this example, Frontierville blocks your forward progress with a lot of "gifts required" obstacles like this one. Each time you try to add an important building to your homestead, they show you this popup. You cannot add the building until you collect 40 items. These 40 items can only be acquired in two ways. 1) demand your friends send them to you as "gifts" or 2) buy them for yourself.
I'm not sure why I hate it so much in Facebook games. It certainly seems to work - there millions of people who are more than happy to send a gift to 50 friends each day, and go through the tedious process of collecting their gifts and sending more back, day after day. Also, for the players who have 50 friends playing the same game, it's trivial to collect all the hammers and nails they need, but for me, it's impossible. My friends don't play Facebook games, so this becomes a pay cash or leave scenario for me. So I leave whenever I encounter this "mechanic."
Giving a gift should be a personal expression of me thinking about a friend and deciding there is something that they would really like, and out of love for my friend, give of myself to get that gift for them (by making it or buying it). Sending out 50 identical gifts to all my friends, whether they want it or not, every day in a routine, without affection, and with the express purpose of getting them to send me something in return... that's not gifts. It's a spam.
So I am on a quest to figure out how I can incorporate the idea of gifting into future social games in a way that isn't an evil spam engine. The companies making these games (such as Zynga) respond to the analytical data they collect about the players. They put in spammy mechanics like this "gifting" because in the short term it leads to better numbers in their games. The need to get these gifts makes players spam their friends, and the constant reminders to come back to the game are helpful. But wouldn't it be better to have a fun reason to come back, not a spammy reason?
I'll let you know what I come up with. Please tell me if you have any good ideas!
Posted by Gregory Marques at 12:10 AM 2 comments

Email ThisBlogThis!Share to TwitterShare to FacebookShare to Pinterest
Labels: gifts, spam, virality
Newer Posts Older Posts Home
Subscribe to: Posts (Atom)
There was an error in this gadget